Diving into the Deep End as a Swim School Franchise Owner 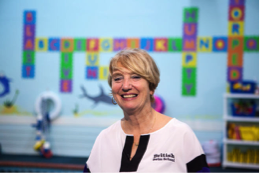 My entrepreneurial journey was organic and almost unplanned. My passion for swimming was instilled in me long before my passion for business.

In the 1970s, I was hoping to be part of the British national swim team, having earned a spot at the Olympic time trials – until an injury ended my competitive swimming career.

In 1976, a friend reached out to inform me that she was opening a swim club in South Manchester and asked for my help teaching lessons. The club saw immediate success, as it was swamped by interest from the local community, and my love for teaching began to flourish.

With that, I had a vision to revolutionize infant swim lessons and create a program that emphasized water survival skills over play, something unheard of at the time. After visiting one of my old swim coaches at his home and seeing how he taught swim lessons out of a built-in pool in his garage, I had a revelation – I wanted to open my very own swim school founded on my philosophy of how to teach children to swim. Soon after, I persuaded my husband that we should sell our house to create the funds and begin searching for ways to make my dream become a reality.

Standing tall in the face of rejection

While I had never before looked at swimming as a business opportunity, the joy teaching gave me the inspiration. My coach’s setup drove my decision to open my swim school in the enormous basement of a dilapidated four-story Victorian home. My dream was to build a pool to hold the classes in, but I was continuously turned down for a permit since the home was a residential property.

After fighting for the support of a Manchester city council member to help push my request through local planning regulations, and finally succeeding, I received my permit.

When we began running out of funds to complete the build out of the pool, I decided to apply for a loan to sustain us. I visited every bank in the area, but was continuously rejected. It was at this point that I stumbled across a television program called “Enterprise 80s”, an early 1980’s British version of “Shark Tank.”

I decided to submit my business plan and make my case for why I should appear before the committee in order to receive funding. A few months later, I received a note stating that while I did not make the final 10, I did make the final 20. As a result, I received a loan of £10,000.

Swimming Across the Pond

Ten years later, I decided to move to overseas to Florida where my sister was living. I arrived in the United States with one suitcase and $3,000 in my pocket.

It didn’t take long for me to decide that I wanted to bring my swim school concept to the U.S. While I had no money to build a pool, I met a group of men opening a fitness center in Coral Springs, Fla. who I convinced to let me to use their pool for classes. In 1993, the first American-based British Swim School opened.

The new school was wildly successful. The fitness center, where the pool was located, began asking me for a greater percentage of my profits. I wouldn’t tolerate being pushed around and instead explored other options.

Financial backers helped me build a pool in Coral Springs, Fla., where I taught for the next 10 years. Things eventually began to snowball, and I opened a total of four locations. From there, I successfully partnered with my first big box gym, Bally, for two additional locations.

The growing interest in my concept, which differed from other programs in the area by offering unique water survival skills lessons for children, opened my eyes to the potential of a thriving British Swim School across the country.

A franchise is born

In an effort to grow faster and provide a lucrative business opportunity for local entrepreneurs, we began franchising in October of 2011 with four locations in Maryland. Our business has since grown beyond our wildest dreams in just the past four years. We have 45 franchise locations open in 14 states and one in Turkey, which operates out of various gyms, hotels and apartment complex pools. We teach almost 10,000 pupils per week, provide a great future for our franchisees and most importantly, we help save lives every day.

Swimming has always been a part of my life and always will be, and it brings me great joy to know that our program will changes lives for years to come.

To learn more about how you can own a British Swim School or other franchise, schedule a call with Trish Benedik Click Here